The Webster’s Dictionary defines the human mind as the element in an individual that feels, perceived, think, wills and especially reason.

The human mind has the following key characteristics:

(1)        The Human mind is cosmic. It is the central point or element in man that has celestial nature and which enable him communicate with the unseen nature.

(2)        The human mind is the seat of ideation, memory, visions, critical thoughts, insight and visualization.

(3)        The human mind is also the central point which enables him transcends into the world beyond. This is enhanced through effective and consistent prayers and meditation.

(4)        The human mind is dynamic and progressive. Romans 12:2, “…. but be ye transformed by the renewing of your mind, that ye may prove what is that good, and acceptable, and perfect, will of God”.  Ephesians 4:23, said “…. be renewed in the spirit of your mind”.
THE TWO NATURE OF THE HUMAN MIND

The Positive or the Spirit Man: The positive man is characterized by a mindset that promotes healthy life style of the individual and the society. The positive mind sees life as a gift and seeks the good and progress of the society. This positive mindset bears fruits which include joy, love, peace, long-suffering, gentleness, goodness, faith, meekness, temperance. The spirit man is always in the spirit and operates in a positive attributes.  It is well organized, well thought-out and always guarded against selfishness, competitiveness and self-centeredness, pride, vain glory, provoking and envying one another. 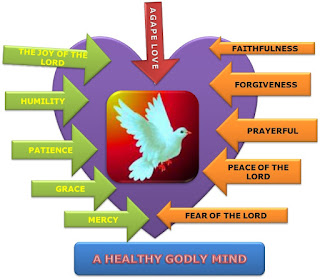 The Negative or the Fleshy Man: The negative or fleshy man operates in the flesh. He is characterized by selfishness, egoism, worldly desire of materialism, I-want-all syndrome and avariciousness which include Adultery, fornication, uncleanness, lasciviousness, Idolatry, witchcraft, hatred, variance, emulations, wrath, strife, sedition, heresies, Envying, murders, drunkenness, drugs addicts, homosexuality, medium practice, reveling, and such like. The fleshy man is self-principle oriented. It has nothing good for others rather it is designed to take from others. 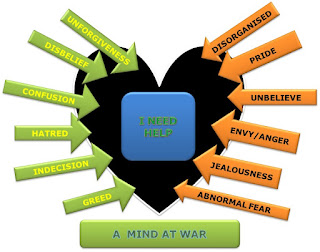 These two natures of the human mind are what determine your mindset. They are the foundations of your mindset. They guard you to make decisions, take actions and chose between what is right or wrong. Mindset therefore is defined as a complex mental state involving beliefs, feeling, values, judgments, morality, opinions, thoughts, principles and positions to act in a certain ways.

Mindset can also be seen as the totality of what the mind perceived, grasp and become part of the mind. In a fixed mindset, people believe their basic qualities, like their intelligence or talent, are simply fixed traits. Most people have their mindset structured from Biblical point of view. Others have their mindset structure from what happened to them. To some, it is structure base on mental perception of life or circumstances of life.

THE MINDSET AT CONFLICT
The mindset at conflict refers to a critical point or stage of life when man is spiritual or psychological detached from his real self. There are moments when our feelings completely contradict what we want. At this point, we feel that there is a lack of consistency in our behaviors and attitudes. At some points, we become unpredictable, disorganize and almost lost about ourselves. Our behavior becomes volatile. The activities of the mind become crippled. Decision becomes indecision. According to a writer, “A person who has a scattered or unpredictable behavior is usually the one who has a lot of inner conflicts that have not been resolved, thus lacking a congruent inner space. A conflict simply means that the mind is confused between are multiple “perspectives” and inclinations and is not able fixate on a singular vibration of thought. A person who has a consistence conflict of the mind tends to exhibit low self esteem, psychologically burden, spiritually crippled and physically manifest changes in moods and personality. This is where defence mechanism sets in, because there is a gap between his ego and super ego. The spiritual nature is not in term with his real self. 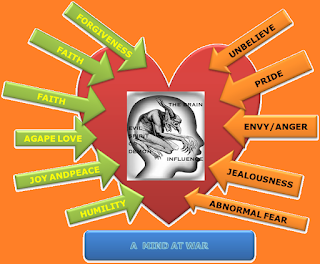